Did you know that every month has an associated birthstone? That’s right! Each month is associated with a specific precious stone or gem that has its own unique properties and speaks the truth about the individuals born in that month.

For instance, the precious gem associated with April is emerald or diamond, Spinel relates to August, the birthstone connected to September is sapphire, December is tied to the stone onyx, and the July birthstone is ruby. There are many more precious gemstones associated with different months. Today, we’ll be discussing ruby, it’s stunning red color, vibrant ancient Hindu roots and why it makes such lovely jewelry

There’s a lot of history behind birthstones and ruby in particular. It's one of the most well-recognized gems. Ancient Hindu culture held Ruby in high regard. In fact, many ancient cultures believed in the divine properties of the gemstone ruby. Let’s dive in and take a look at what it means to be a July baby and how this red gem relates to your psyche and your deepest self.

The July birthstone color is red, which adds a beautiful vivacious touch to anything a jeweler could create. While ruby can come in various different shades of red and contain streaks, it’s deep red color is characteristic of the stone and helps it stand out in any crowd. A pair of ruby earrings or any jewelry crafted from a ruby offers a special quality that can’t be replicated.

Ruby is born out of mineral corundum, which is the crystalline structure that creates the beautiful red rubies we know and love today. Corundum can also produce sapphire and pink sapphire. Different gemstones can be produced depending on environmental factors. Just like humans, we all come from the same stuff, but throughout life, we become different. The same is true for ruby, sapphire, and many other precious gemstones.

A natural ruby is typically found among the mines located in Thailand, Nepal, Taiwan, Vietnam, Afghanistan, and Pakistan, but there are also several ruby mines located around the United States.

The ultimate birthstone chart guide that unlocks the deeper meaning of each birthstone color, highlighting the personality traits behind each gemstone from the January birthstone all the way through the December birthstone. 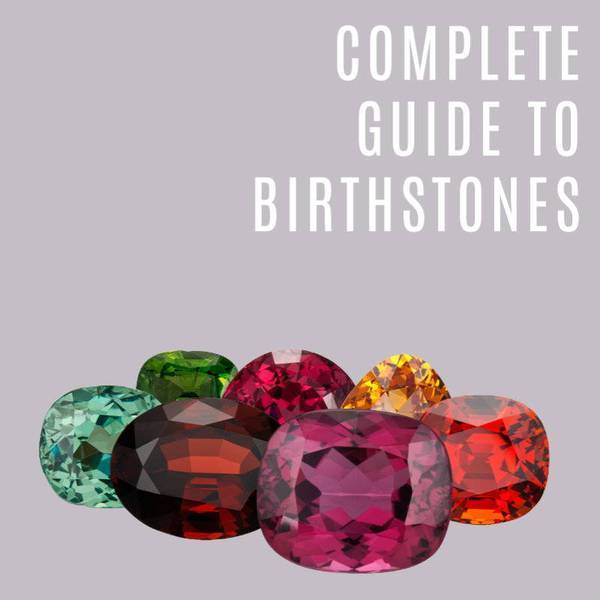 The History of Birthstones

Birthstones first begin popping up in several different instances and cultures throughout history. Each culture has its own idea of what makes these gemstones special and why the color of each stone is important to the person born in that month.

Another origin story lies in ancient Hindu tradition which associates different colored stones with different chakras. People born in certain months had talents or abilities associated with the chakras and stones that went hand in hand with their month. For instance, someone born in July was known to hold a fiery chakra as vibrant as the red ruby, which was associated with the root chakra. People with this gemstone were said to have a sense of safety and grounded reason.

No matter which tradition you choose to believe, birthstones have become a very important part of modern culture and can be a great way to better understand yourself and to represent who you are as a person.

Rubies are among diamonds and sapphires as one of the most precious gems in the world. Rubies have a universal meaning of power, passion, and good fortune. As July’s birthstone, the ruby is meant to enhance the beauty and confidence of those who wear it.

Also known as the King of Gems, rubies have been used as a symbol of royalty through the ages. They have emblazoned crowns, rings, earrings, and necklaces of history’s most powerful figures. Today, the ruby is meant to place the same regal value on those lucky enough to possess one.

Believed to imbue confidence, the ruby can boost a woman’s self-image and attract admiration. For this reason, ruby gemstone earrings are designed to bring out the fire and passion in a woman’s eyes. Also often used as a symbol of the heart, a ruby necklace is a popular choice to represent romance and commitment. In addition to July’s birthstone, the Ruby Anniversary celebrates 40 years of marriage. 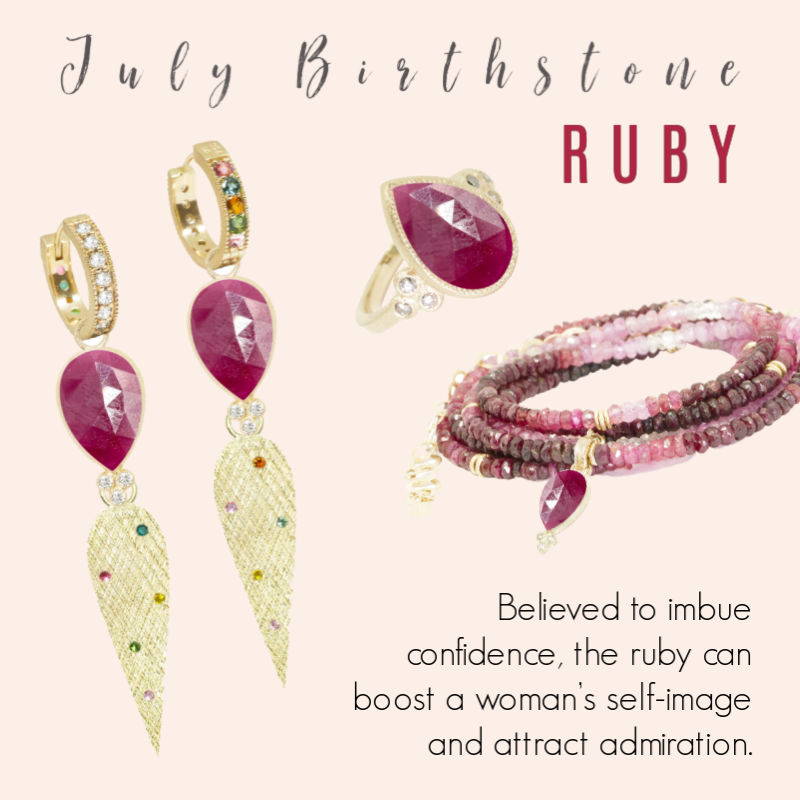 There are plenty of famous rubies around the world that have become well known in pop culture for their size or other attributes. These gems have a unique history and have many mysteries surrounding them that make owning a pair of ruby earrings or other jewelry a beautiful and exciting thing.

One such ruby is the 125 Ruby which is the largest ruby in the world. This gigantic gemstone weighs almost eight and a half pounds and is worth 18,696 carats. Plus, it has a distinctly beautiful red color when placed under ultraviolet light, which gives it an extra special characteristic to set it apart. All in all, the ruby measures 122mm x 112mm x 134mm, making it one hefty gemstone.

Another large red ruby that’s famous for its size and brilliance is Chaiyo Ruby. This ruby is not only huge, weighing about 109,000 carats, but it’s also got a mysterious story surrounding it. Some experts claim that it came from Africa and was first purchased at the Thai-Burmese border, while others claim that it's completely fake. Still, other experts say that it was involved in a huge military heist and was stolen from its original possessor. No matter what its origins really are, the ruby is currently kept safe in the home of its private owner in Laos.

Speaking of crazy theft stories surrounding precious gemstones, another famous ruby is the DeLong Star Ruby. This ruby is a little over 100 carats and currently sits in the Museum of Natural History located in New York City, New York. It has a beautifully sharp red color with a 6-rayed star and its namesake is a woman named Mrs. Edith Haggin de Long who originally purchased the ruby in 1937. Unfortunately, this ruby was stolen during a jewelry heist in 1964. It was stolen along with two other rare and valuable gemstones, but luckily was eventually recovered and is now safely back where it belongs.

The last noteworthy ruby is a gemstone called The Sunrise Ruby and is the most expensive ruby in the world. It's untreated and clocks in at almost 26 carats. It has a gorgeous “pigeon blood red” color which gives it a unique clarity and brilliance and is complemented by its own finely curated shape and cut. It was named after a Sufi poem from the 13th century and is currently selling for over $30 million. It’s not only the most expensive ruby sold at an auction but is also the most expensive all around gemstone ever sold at auction.

Our ruby gemstone collection includes rings, necklaces, and earrings in many different designs. Nina Nguyen Designs also offers different pendant frames that can encase different gemstones, allowing you to switch red rubies for blue, turquoise, aquamarine and more gemstones. The ability to mix and match makes our jewelry collection all the more valuable.

The Significance of Rubies

Rubies have many meanings and provide special attributes to a wearer born in July, but there are a few key things to note about July’s birthstone.

Firstly, it’s important to note that rubies are associated with passion and a desire to live your best life. Rubies are typically used in crystal healing practices for integrity, devotion, passion, enthusiasm, inspiration, courage, healing, high energy, generosity, and power and leadership. These properties make rubies symbolic of people who are cheerful and engaged in the life they are leading and are excited about future prospects.

Rubies are a popular choice for engagement rings because of their significance. Their zest for life, dedication, and passion make them desirable to fashion into all types of jewelry. If you’re thinking about getting engaged soon, this could be a great way to bring your birthstone into your new life!

Incorporating Your Birthstone Into Daily Life

A birthstone ring is one way to incorporate your personal birthstone into the jewelry that you wear on a day to day basis. Plus, when you put on a ruby ring to represent your birthstone, you can open your aura up to new levels of healing. In new age philosophy, wearing a July birthstone ring or a ring associated with your birth month can heal you from within by attracting healing energies. Wearing these rings dissipates stress and creates a protective shield around you to keep you safe and calm in everything you do. And to all the gentlemen out there, buying your sweetheart an engagement ring related to her birthstone can add a unique and precious twist on traditional engagement rings. Another popular type of birthstone jewelry is a necklace. These come in many forms and styles, including pendulums which channel energy and protect your spirit, or in the form of birthstone beads. Plus, a variety of different metals can be used in crafting your birthstone jewelry, such as silver, sterling silver, even gold or rose gold. No matter what you’re looking for, wearing a birthstone necklace provides an extra layer of protection to your daily life and allows you to proudly display who you are and where you came from. 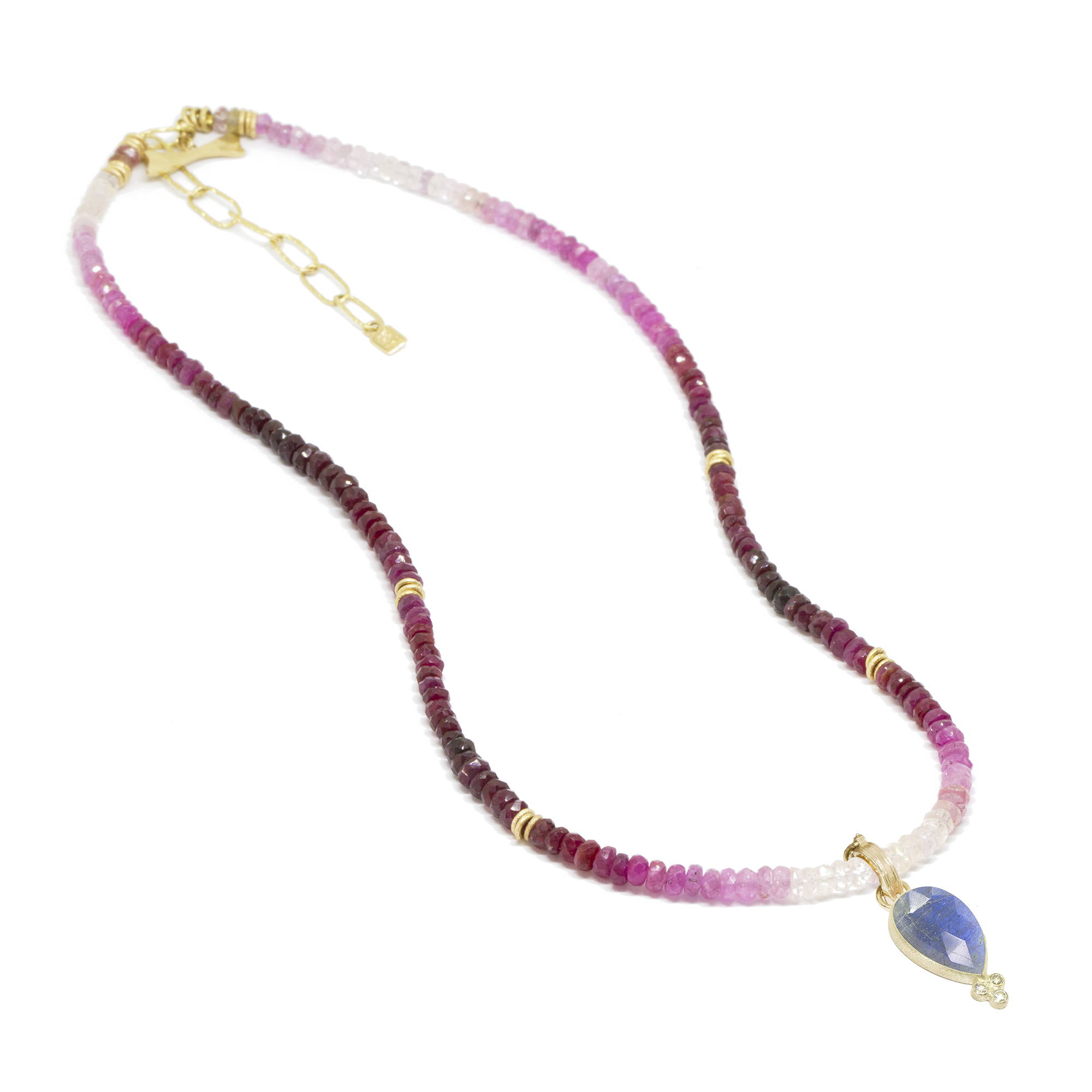 Earrings are probably the most subtle way of displaying your birthstone but are a great way to incorporate your July birthstone into your daily life without being too obvious. Earrings can come in many different shapes, sizes, and styles and can enhance any outfit that you wish to wear. Wearing earrings adds a taste of your special birthstone to your look without being too loud.

At Nina Nguyen Designs, our patent-pending Ruby Gold Convertible Earrings Set is the gift that keeps on giving. The pieces of this ruby jewelry set can be transformed for multiple-use styling. The gold and ruby earrings can be converted into different styles of earrings as well as into a pendant that can be worn on a necklace or used as a charm. 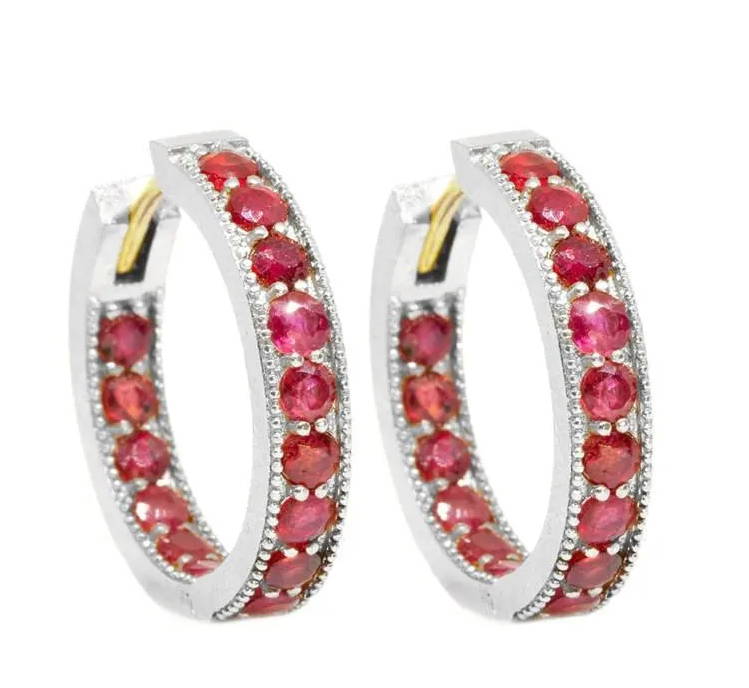 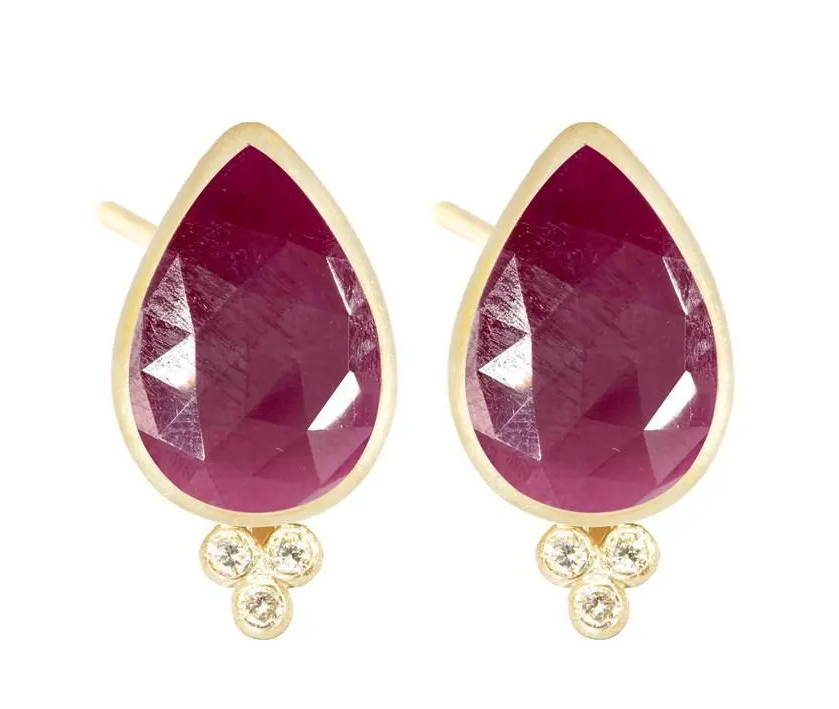 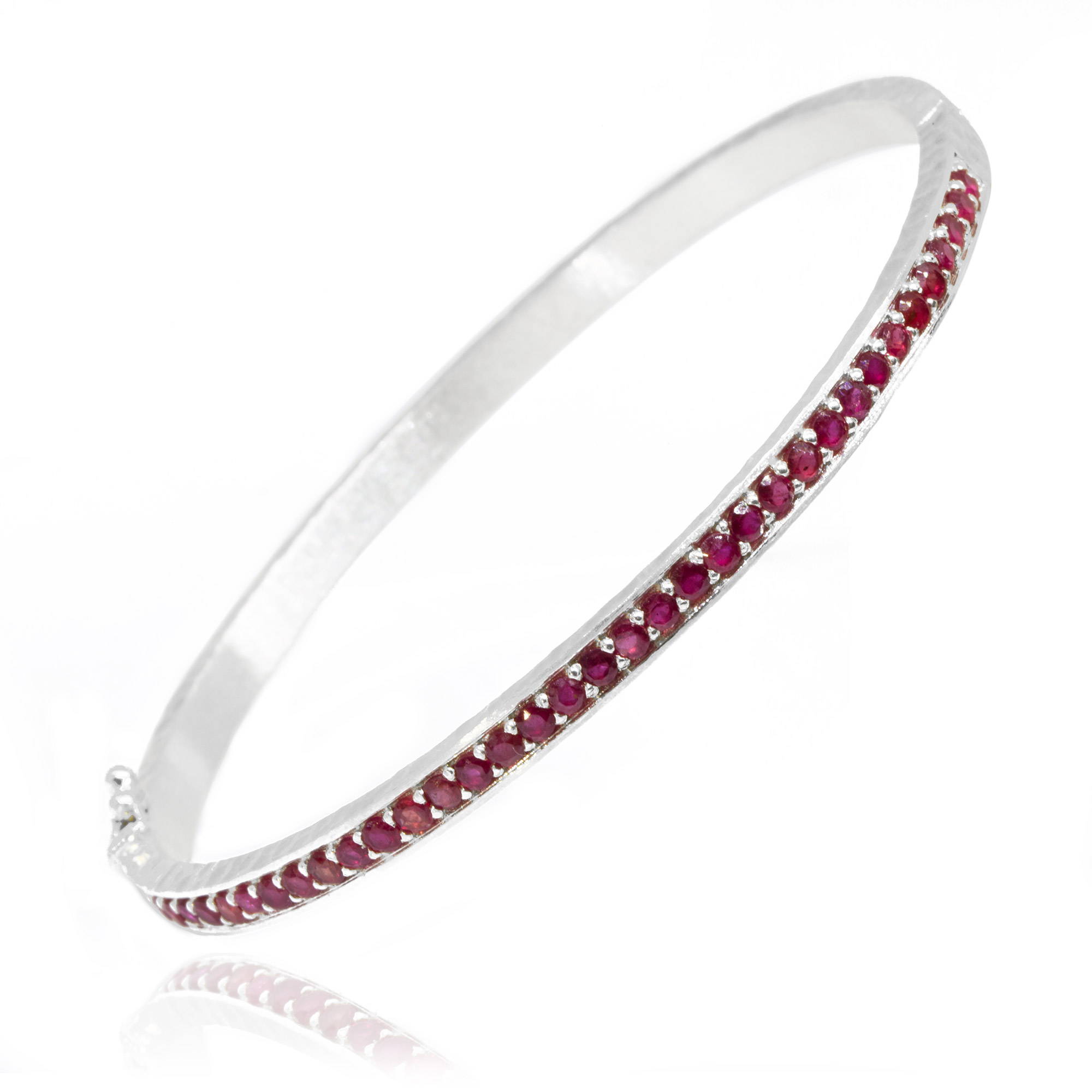 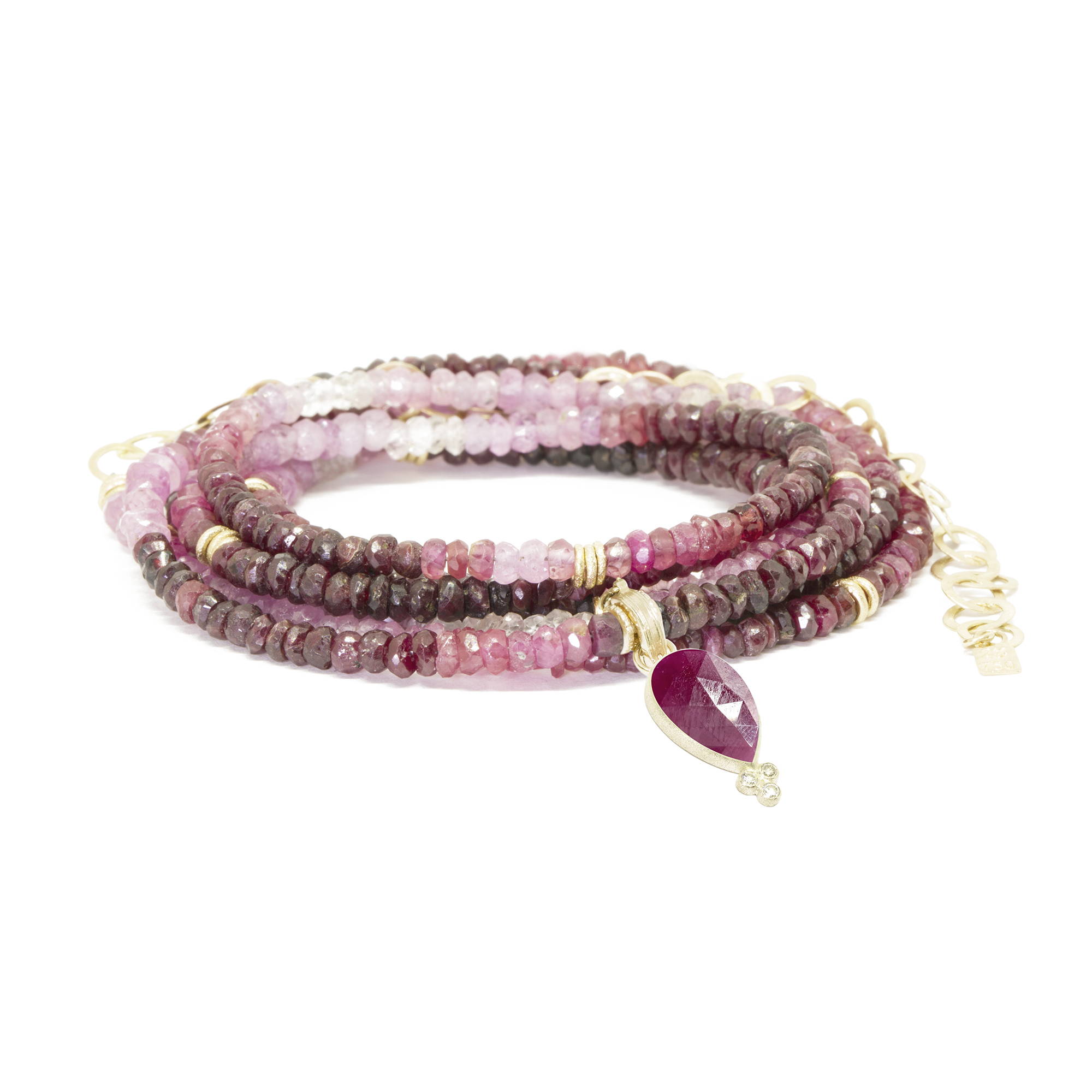